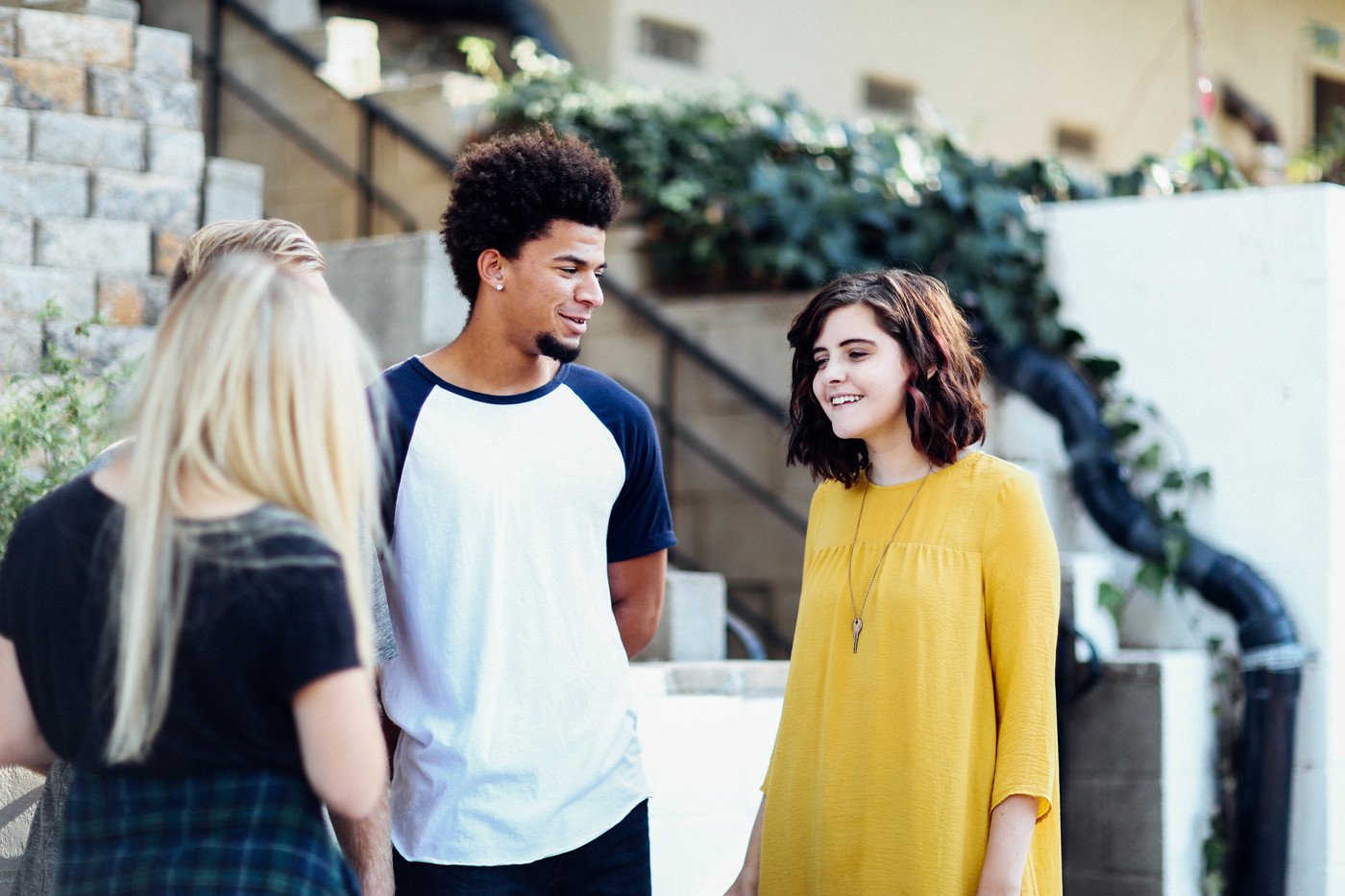 Can your body angle affect others during a conversation at networking events? It can, it seems. Lauge and I recently sat down with an inspiring network manager from Aarhus for a talk on pitching and networking in general. He had been leading networking events for years and throughout our conversation shared a bunch of tips he had learned over the time with us. Lucky us!

And lucky you. Since we’re sharing one of them here today.

So, the tip is all about how you angle your body during conversations when networking and why it can affect others to join your conversation (or not).

Strange, huh? When the networking manager began sharing this insight, I was immediately interested in the nerdy details. The nitty-gritty.

He explained that if you want to express to others that it’s cool with you that another can lean into your conversation and take part, try angling your body around 45 degrees away from the person you’re directly talking to.

Don’t pop out your angle ruler, though. No weird geometrical magic is going on, it’s all purely human. The “trick” is to physically show others that your conversation is “open”.

Let me show it to you visually. Look at how the persons standing on the left are more open in both their body language and their conversation. 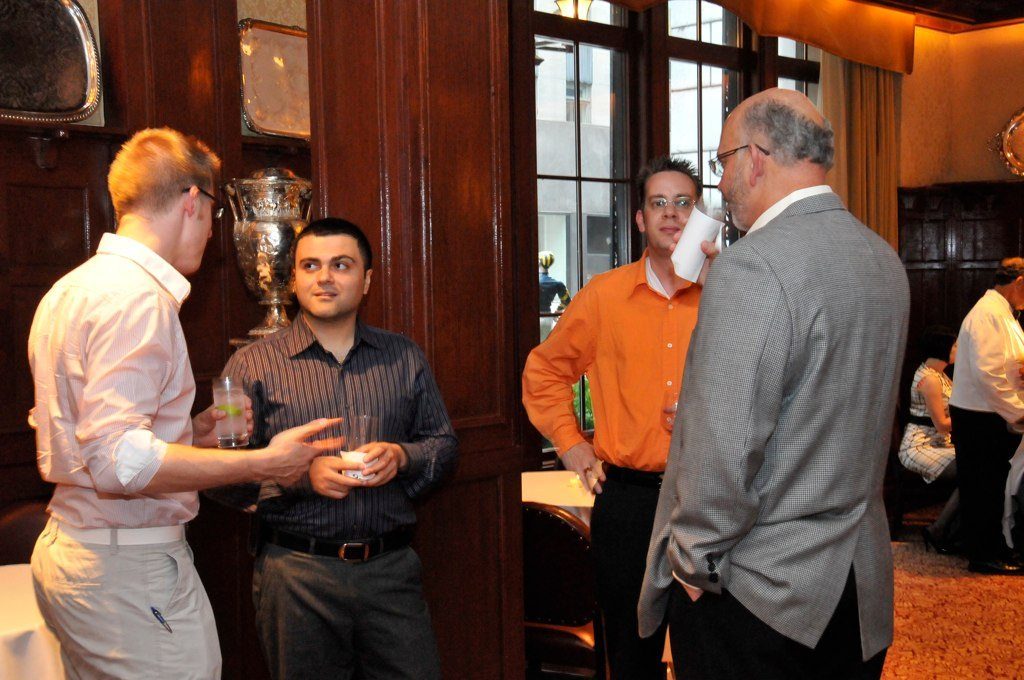 Think of the opposite situation, the intimate conversation between two people. Visualize how they stand. Face, front, and feet facing towards each other, direct eye contact, maybe slight gesturing.

To visualize this, try looking at this couple. 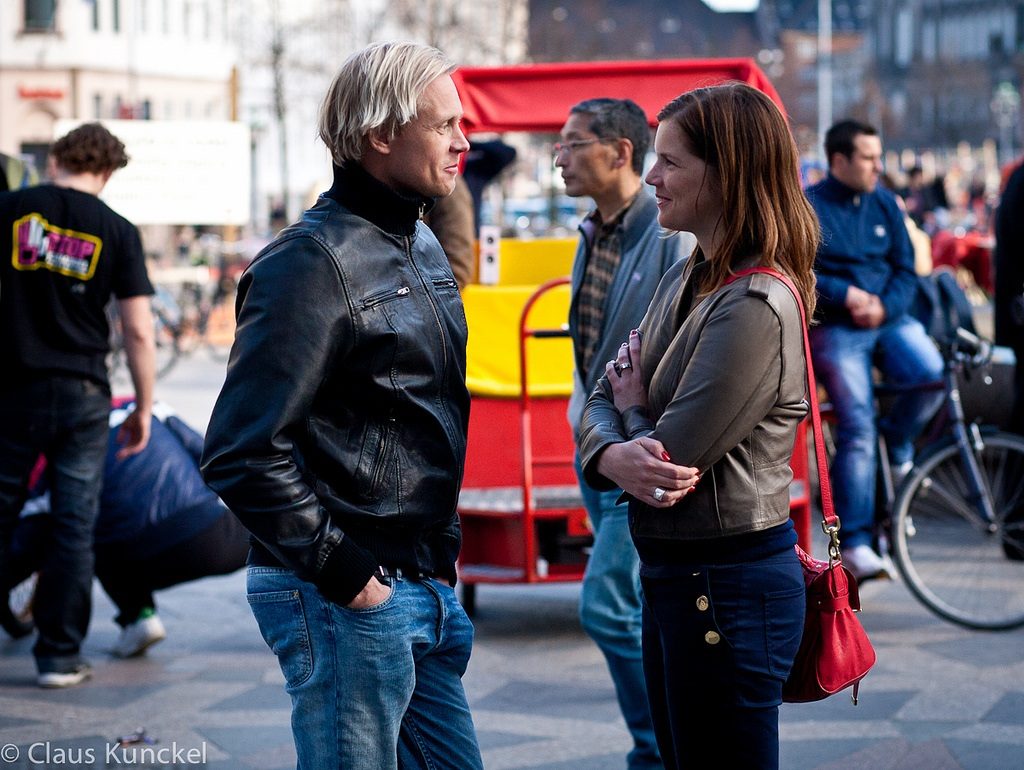 The extreme of this is the subtle, but serious, argument between partners. We’ve all been there, either as spectators or ourselves acting out at wedding parties, birthday parties or well, networking events, if you both enjoy a romantic night out trading business cards.

In these situations, you certainly don’t want to interrupt. Things could get messy. Luckily, their body language signals everyone to keep out. The same cue exists when you’re networking and at any other social gatherings that are more subtle.

Needless to say, angling (not the fishing kind) can be a great tool to have in your networking toolkit the next time you’re fishing for new relations.

How you can use angling consciously when networking

Now that you know a bit more about how angling plays into conversations, let’s put the concept into practice. There are a few situations to keep in mind the next time you’re mingling.

First, when casually scanning the room, you now know which conversations could be open or closed. The angles of the people involved can often be clues to this. Casually join those that are open and give space to those that are closed.

Remember, closed conversations can eventually open up, and vice versa.

Second, which might be obvious to you now, is that you can choose to close and open a conversation yourself. Want some (hopefully) uninterrupted time with someone? Angle your body directly towards that person. If they do it as well, then the conversation will express “closedness” to others.

As with most things, don’t overdo it or overanalyze. Act natural and use angles as a helpful hint when you feel it necessary and relevant.

Anders is the co-founder, designer and front-end developer of Pitcherific. Alongside Pitcherific, he researches the mechanics of successful startups and contributes his experience to very early-stage entrepreneurs whenever time allows. His goal is to make the startup process more straightforward, understandable and accessible to everyone.